Major General (Retired) Robert G. Catalanotti ‘80 HD ‘15, a member of the Assumption University Board of Trustees, was inducted into the 2022 Cadet Command’s US Army National Reserve Officer Training Corps (ROTC) Hall of Fame.

Established in 2016, the Hall of Fame recognizes ROTC alumni who influence the development of leaders through their military or civilian careers and have made significant contributions in those careers.

Maj. Gen. Catalanotti was nominated last spring for the work he has done in support of Assumption University’s ROTC program for many years. The program has grown from one student to eight with the aid of Catalanotti’s support through admissions, marketing, and scholarship benefit initiatives. 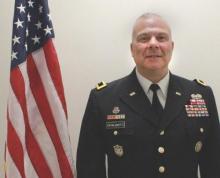 Assumption joins nine other colleges and universities in Massachusetts, comprising the Baystate Battalion Army ROTC program. Assumption also offers an Air Force ROTC program. Through this collaboration with other institutions, students are able to form relationships with other cadets outside of their respective college or university.

In addition to his bachelor’s and honorary doctorate degrees from Assumption, Major General Catalanotti has received two master's degrees from the United States Army War College and Suffolk University. Catalanotti commissioned into the United States Army in 1980 from the WPI ROTC program and was inducted into their Army ROTC Hall of Honor in 2016. He is the former senior advisor to the Assistant Secretary of Defense for International Security. Among his many honors, Catalanotti has been awarded the Army Distinguished Service Medal, Defense Superior Service Medal, Bronze Star, Combat Action Badge, and the Department of State Superior Honor Award.

“This recognition is truly an honor and a testament to MG (Ret) Catalanotti’s contributions as a servant leader and ambassador of Assumption University and the US Army ... The success that our program has enjoyed over the last few years is a testament to our great partners like Assumption University and MG (Ret) Catalanotti.” said Adam Heppe, Professor of Military Science at Worcester Polytechnical Institute.

Assumption University thanks and congratulations Major General Catalanotti for his service to the country, the ROTC program, and the University.

Assumption University, a recognized Yellow Ribbon and Military-Friendly institution of higher learning, joined the VA of Boston and Brockton for their Annual Veterans Expo on Saturday, September 24. Representing the University were veterans, Michael Rubino, General Counsel for Assumption and Tommy T...