A tradition since 2017, Assumption University is preparing this week for its 5th Annual Veterans Appreciation Lecture. Arriving on the heels of Veterans Day, this year’s annual lecture takes place on Thursday, Nov. 17 from 6 p.m. – 7 p.m. in the Richard J. and Sophia Catrambone Health Sciences Center, Room 107.

This year’s guest speaker is Colonel George Horsley, the State Surgeon General for the Massachusetts Army National Guard. Colonel Horsley is an accomplished soldier, physician assistant, father and life-long learner who has spent the last 36 years serving the U.S. on active duty in the Army or serving in the National Guard. In his lecture, Colonel Horsley will explore the historical relationship between military medicine and general medical advances in the U.S. A recording of Colonel Horsley’s address will be made available on the veteran’s page on our website after the event.

The Annual Veterans Appreciation Lecture is just one of several ways the Assumption community supports the academic goals of its veteran students. Assumption takes great pride in the effort which earned it a reputation as one of the best schools of higher education for U.S. military veterans. As a 2022-23 recipient of the Military Friendly® School Silver Award, a national designation we hold dear, it is gratifying that our efforts to be a supportive community for service members, veterans, and their dependents – who have sacrificed so much in service to our nation – are being recognized.

To earn the “Military Friendly” distinction, Assumption demonstrated its keen understanding of the unique requirements of veterans transitioning from a military environment to an academic one. One example is our Veterans Success Committee, comprised of students, professors and specialists like government 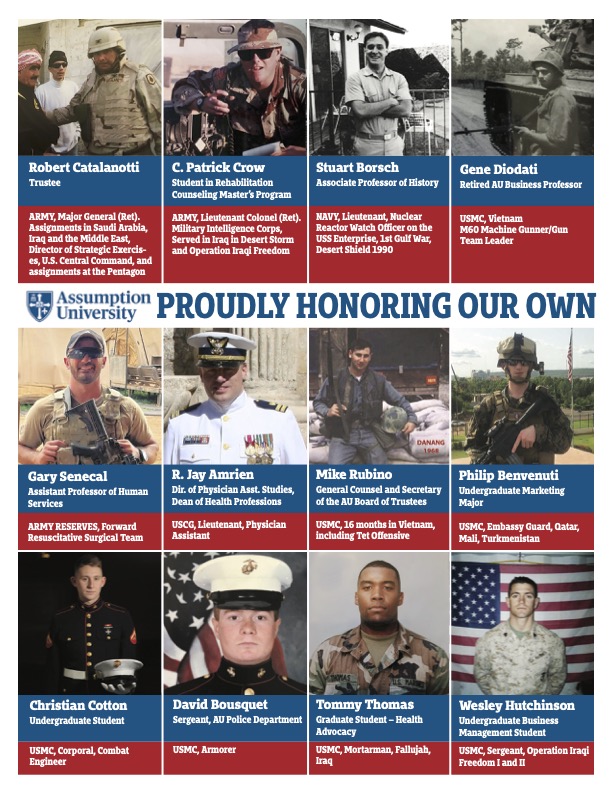 relations and rehabilitation professionals, which meets regularly to develop and enhance programs at Assumption – inside and outside the classroom – to help veterans make the transition from military service to college life. Assumption even funds a work-study position, filled by a student veteran, who serves as a resource to veterans, guiding them to the various on-campus services.

Did you know that among the leadership team, staff, and student body here at Assumption is a U.S. Marine – Mike Rubino, our General Counsel and Secretary of the school’s Board of Directors -- who spent 16 months in Vietnam, including the Tet Offensive? Or that a member of the Assumption Board of Trustees, retired Major General (MG) Robert Catalanotti (more on the MG later), served in the U.S. Army in Saudi Arabia, Iraq, and the Middle East? Or that C. Patrick Crowe, currently a student in Assumption’s Rehabilitation Counseling Master’s Program, served in Iraq in Desert Storm and Operation Iraqi Freedom?

Speaking of MG Catalanotti, a 1980 Assumption graduate, he was recently inducted into the Cadet Command’s U.S. Army National ROTC Hall of Fame in recognition of his tremendous work at the school to support the ROTC program and leadership development in general. MG Catalanotti was inducted into the Hall of Fame in Washington D.C. on October 10 along with several other inductees.

In addition to the Annual Veterans Appreciation Lecture, Assumption supports its veteran students I the following ways:

·       Providing a Veterans Lounge as a place for veterans to meet with other veterans, and to study and learn;.

·       A collaboration with the Worcester Institute for Senior Education (WISE), a lifelong learning institute whose members are older adults, many of whom are veterans who are always willing to lend an ear, or hand, to a fellow service member;

·       Our annual day of remembrance to recognize veterans for their service.

To all veterans, thank you for your courage and for your service!

Major General (Retired) Robert G. Catalanotti ‘80 HD ‘15, a member of the Assumption University Board of Trustees, was inducted into the 2022 Cadet Command’s US Army National Reserve Officer Training Corps (ROTC) Hall of Fame.&nbsp;&nbsp; Established in 2016, the Hall of Fame recognizes ROTC alum...