Assumption University’s chapter of Best Buddies has been named 2022 Outstanding MA Collegiate Chapter by Best Buddies MA & RI. The recognition, awarded annually to the chapter that most successfully demonstrates a dedication to promoting inclusion in their community, was awarded to the Assumption chapter after it had been nominated earlier in the spring.

“Winning 2022 Outstanding MA Collegiate Chapter is such an honor for the Assumption chapter,” co-president Kathleen Moran ‘23 said. “Our group of leaders has such as strong ability to help get more people involved and it made a huge difference as we transitioned back to in-person events this year.”

“I feel like we’re more than a club,” co-president Katrina Kowalyk ‘23 added. “We’re a community. I think the people we have do a fantastic job of making everyone feel included and welcome.”

The Assumption chapter began the 2021-22 year with a mission to transition back to in-person events, having spent much of the previous two years limited to virtual events only. In October 2021, the chapter participated in a Best Buddies Friendship Walk in Boston, raising $1,000 on its way to becoming the top fundraiser in Central MA. As the year continued, the club continued to build strong relationships with their buddies at various events and sports games.

In March, which is recognized internationally as Best Buddies month, the chapter celebrated with a month-long campaign of events and activities designed to promote inclusion and the mission of Best Buddies. The chapter hosted tabling events around campus throughout the month where students came to learn more about the community, sign pledges of inclusion, and tell their own stories of inclusive experiences.

On March 18th, the chapter hosted the main event of its campaign: the Best Buddies Assumption Dodge Exclusion Dodgeball Tournament. The tournament, which represented the chapter’s first large on-campus event since February 2020, featured rounds of dodgeball that evolved into singing, dancing, and other yard games as various members of the Assumption and Best Buddies communities gathered to celebrate inclusion. 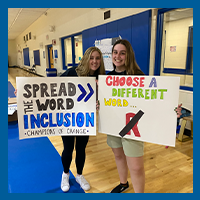 “Seeing inclusion is my favorite part of Best Buddies,” Moran said. “There were four buddies that attended the tournament and at the end none of them wanted to leave. They thought it was the coolest thing ever how so many members of the Assumption community showed up to meet them and play in the tournament with them.”

“This was one of our first events for the buddies on campus in a long time,” Kowalyk noted. “It meant a lot to us and to the buddies that members of the Assumption community from other clubs and athletics teams were there to support our mission.”

Best Buddies is an international nonprofit organization dedicated to facilitating opportunities for friendships, employment, development, and inclusive living arrangements for people with intellectual and developmental disabilities. Best Buddies in Massachusetts is represented around the state by 26 college chapters, of which every year three are nominated for and one is selected as outstanding chapter.

Assumption’s chapter aims to create meaningful friendships between individuals who live with and without intellectual or developmental disabilities. In collaboration with the Worcester Transitional program, the chapter fosters one-on-one friendships and hosts engaging and educational events to demonstrate and spread awareness of the Best Buddies mission.

Receive Same-Day Admission At Fast Track To The Pack

How would you like to receive your first college acceptance before summer is even over? On Thursday, August 18th, Assumption University will be giving high school seniors this very opportunity at our Fast Track to the Pack early acceptance event.