What’s in a Name? Business Students Team Up With Red Sox to Conduct Market Research 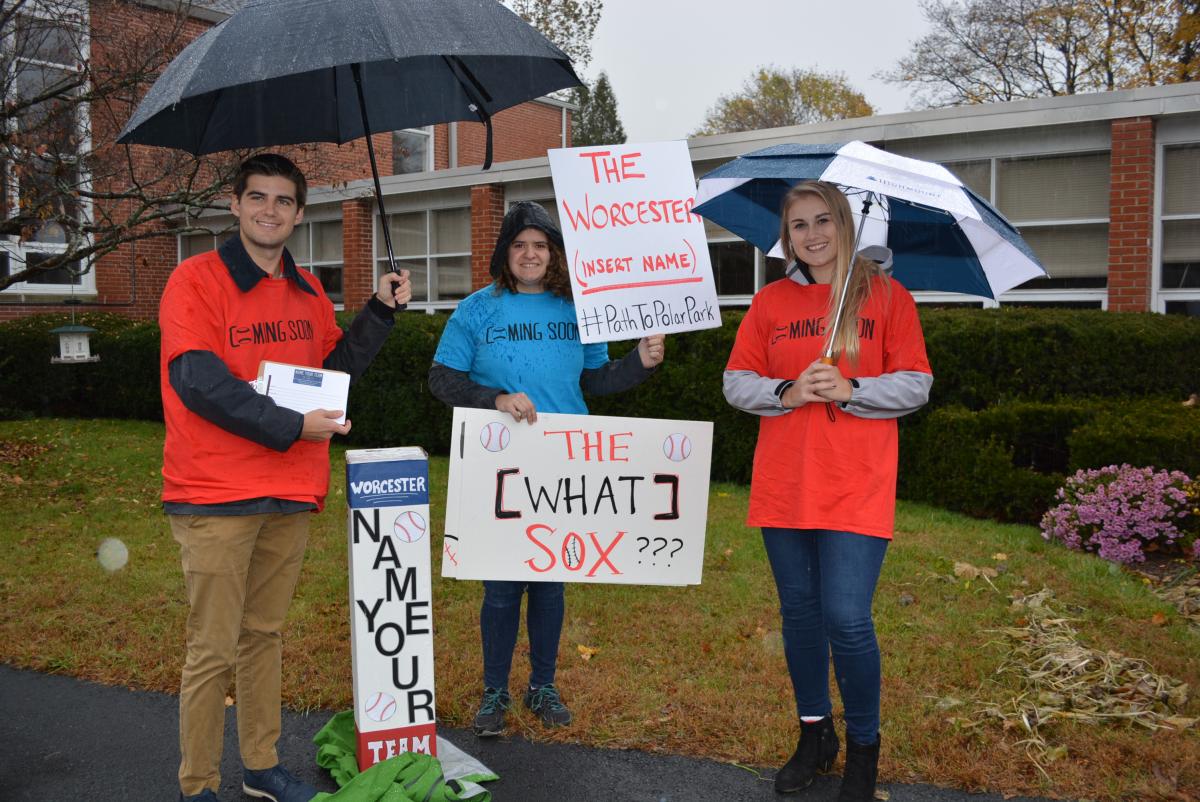 On Tuesday, Nov. 6, millions of Americans voted in the midterm elections, but in Worcester, city residents also cast votes for the new name of the Triple-A affiliate of the World Champion Boston Red Sox, who will move to Worcester in 2021. Though the partnership was announced only two weeks ago, the team’s front office staff and more than 20 Assumption students collaborated in a citywide market research project.

Assumption business studies students collaborated with the team to manage five ballot locations across the city of Worcester where voters were invited to cast a vote for the team’s new moniker.

“Today’s collaboration between the Triple-A affiliate of the Boston Red Sox and Assumption students is the first of many joint efforts and an example of the first-hand experience students will receive as part of the new partnership,” said Libby O’Hara, assistant professor of management at Assumption. “The best part is that our students do not have to wait until the team moves to the city in 2021. The opportunities for experiential learning have already begun.”

Danielle Racicot ’19 was one of the students working the polls on Tuesday afternoon. “What we focused on today with the polls, attributes to what we learn in class,” she said. “We are taught to find the deeper meanings behind specific actions for marketing. In this case, it was nice to hear people explain the reasoning behind why they would or would not like the Worcester Red Sox to be called the WooSox.”

Leslie Roda ’19 agreed. “In our sport marketing class, we talk a lot about how important market research is because you really need to know what your consumer wants and needs,” she said. “We witnessed firsthand how important it is to go into the community to engage with the target market and see what they want, especially when it comes to the name. It may seem like a small thing, but it can go a long way in obtaining a loyal fan base.”

This market research project is a three week-long initiative by the Triple-A organization to poll Worcester-area residents regarding their opinions and preferences for the team’s name and/or nickname. Fans could submit ideas, along with an explanation, by depositing their suggestions into one of the ballot boxes on Tuesday. Until Monday, November 26, fans can suggest their ideas by visiting PolarPark.com.

“To Woo or not to Woo, that is the question,” said club President Dr. Charles Steinberg in a press release distributed by the organization.  “We have heard from those who would like to call the team the WooSox, and we have heard impassioned pleas from others to not call them the WooSox.  So we ask, ‘What’s in a name?’  We hope the flavorful conversation and creative juices flow right through the last drop of gravy at Thanksgiving dinner.”

On Oct. 25, Assumption announced that had entered into a partnership with the Worcester Red Sox as a higher education sponsor and one of the team’s 21 founding partners. Through this, Assumption students will benefit from guaranteed internships and scholarships as the institution enhances its commitment to the redevelopment and revitalization of Worcester. Through this strategic partnership with the Worcester Red Sox, Polar Park will become a classroom for Assumption students and city residents.

Members of the Assumption University Baseball team mentored young athletes from the community during the Worcester Red Sox youth baseball clinic on June 5.

Through this partnership, Assumption students will benefit from guaranteed internships and scholarships as the University enhances its commitment to the redevelopment and revitalization of Worcester.