Assumption’s Froelich School of Nursing Ranked Among the Best in New England, Massachusetts 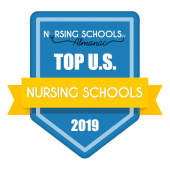 “Being ranked so favorably after only one semester of enrollment is a true testament to the academic prestige of Assumption,” said Caitlin Stover, Ph.D., RN, dean of the School of Nursing. “The strong liberal arts and science education at Assumption is the backbone to the nursing curriculum - clearly the ranking organization recognizes the value that the bachelor’s-prepared nurses graduating from Assumption will add to the professional workforce.”

Erin Hazelhurst ’23, of Rochdale, was accepted to 17 nursing programs and chose Assumption based on the curriculum, new health sciences building, and proximity to a number of clinical settings and hospitals. “As soon as I went on campus and talked to Dean Stover, I knew that no other school was going to have anything like Assumption,” she said. “The building is going to be incredible and will look identical to a clinical hospital setting with the highest technology. I know I’ll be most successful here.”

According to Nursing Schools Almanac, the organization “collected data on over 3,000 nursing schools and campuses throughout the United States” and evaluated each school for academic prestige and perceived value; breadth and depth of nursing programs offered; and student success. Nursing Schools Almanac states that its mission is “to provide aspiring nurses a detailed, comprehensive, and analytical resource for selecting their future nursing school.”

Learn More About the School of Nursing

Students named to the Dean’s List must achieve a grade point average of 3.5 for a minimum of a five-class, 15-credit semester to be included on the prestigious list. The Dean’s List is announced at the completion of each fall and spring semester.