Study Abroad: Making the Most of the Undergraduate Experience

Hannah White, admission ambassador and valedictorian of the Class of 2021, pursued the unique opportunity to travel abroad and experience Assumption's Rome, Italy, campus which is ranked as a Top 10 Study Abroad Program by Best College Reviews. 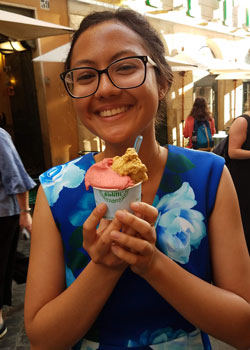 At the end of my sophomore year at Assumption, I had the opportunity to travel to the University’s Rome, Italy, campus with a group of other students through the SOPHIA program (SOPHomore Initiative at Assumption). While I was only there for 10 days, having the Eternal City as my classroom was an unforgettable experience.

Earlier that semester, I traveled to Greece with Assumption’s Core Texts and Enduring Questions over spring break. I thought my week in Europe would dampen the novelty of seeing ancient sites in the middle of a modern urban sprawl. However, I was still unprepared for the experience of wandering around a busy street corner and seeing things I had only ever seen in history books. During our second day in the city, we hopped on a bus in front of the ancient square where Caesar was killed. Several times during the trip, we would spontaneously visit an inconspicuous chapel and find masterpieces by Bernini, Michaelangelo, or some other renowned Italian artist that I had only ever learned about in an art history class. In addition to these hidden gems, we also visited the famous sites that were awe-inspiring even from a distance: the Colosseum, the Roman Forum, the Pantheon and all four of the city’s major basilicas, among others. In St. Peter’s, we climbed to the very top of the dome then descended into the excavations beneath the basilica to see the remains of St. Peter. We spent every day using the city as our classroom for everything from history, politics, art, culture, and food.

Speaking of food, every restaurant we tried was phenomenal! However, my favorite meals were the family style dinners prepared for us by Sra. Romanini, the chef at Assumption’s Rome campus. Every night she cooked us a multi-course traditional Italian meal made with ingredients she bought at the nearby market place that morning. While we ate, we recounted the day’s experiences. After dinner and an overview of the next day’s itinerary, we dragged blankets to the rooftop terrace and would gaze at the lights of the city until sleep called us to our beds. When we had free time, my friends and I would either walk the city streets, stopping at stores and parks at our leisure, or take the Rome Metro to our favorite gelato stop near the Spanish Steps.

I highly recommend your child consider studying abroad while in college. It’s a fantastic way for your child to become fully immersed in a different culture and expand his or her worldview. Not only that, but by traveling and stepping outside of his or her comfort zone, your child will become independent and confident in his or her ability to take on the world. When visiting colleges and asking about study abroad options, I encourage you to ask the following questions:

My short two weeks in Rome was enough to give me the travel bug. Although I wasn't able to travel abroad again due to the pandemic, my friends and I hope to visit Italy in the near future and explore other cities like Florence, Venice, and Milan. We just have to brush up on our Italian first!

In bocca al lupo (good luck) with the college search!