On Sunday, September 6, Assumption celebrated a milestone in its rich 116-year history as it formally marked the transition to Assumption University with the annual Mass of the Holy Spirit and unveiling of the new university sign at the front entrance of campus.

“We come together this morning as a community at an unusual moment. One might say a moment of paradox, a time of joy and a time of challenge,” said President Francesco C. Cesareo, Ph.D., noting that being able to celebrate in person and the transition to university are both joyous, yet cloaked in a time of uncertainty, worry, and unrest and upheaval in society. Today, we ask the God of Wisdom to help make us wise, and to help us understand what it means to be a human being because that is at the heart of a Catholic liberal education. The Holy Spirit is the conduit through which we ask the God of Wisdom to make us wise.”

During his homily, Father Dennis Gallagher, A.A. ’69, the Provincial of the North American Province of the Assumptionists who presided over the Mass of the Holy Spirit, highlighted the importance of unity in the word university. Though Assumption’s new programs and new school structure seems as if the institution is dividing itself rather than unifying, it is the collective efforts of faculty, students, administrators, and trustees who define the essential meaning of the word university.

“What is it that we can appeal to, to give substance to our claims to be a University? I think the answer to this is that we are all seekers after the truth,” said Fr. Gallagher.  “At its heart, Assumption University is a community of learners, bound together by a search for the truth. This is our common enterprise. This is what unifies us and gives meaning to our efforts both inside and outside the classroom. That search may look different according to the modes of inquiry in our respective fields of study, but it remains, that seeking after truth, the defining characteristic of our life as a university.”

As someone whose life has been connected to Assumption for many years, Fr. Gallagher recalled the hundreds of students and alumni he has seen to whom an Assumption education has meant “all the world.” “For some many of them, this is where they have found their life’s work, have met their spouses, have been touched by a love of learning, and were they have been sent on a path to a thoughtful and generous life,” he said. “Today, we are bound together by a celebration of our common enterprise, an educational mission that has been entrusted to us. We’re also bound together by a great sense of gratitude.”

After the Mass, Assumption aired a video, Assumption: Ever Ancient, Ever New, showcasing the pivotal moments in the institution’s history.

“Assumption truly is Ever Ancient, Ever New,” said Student Government President Garrett Cardoza ‘21. “In class, we are discussing the theories of Aristotle and St. Augustine and applying them to our lives today. Walking through campus, we see the great statute of the great Emmanuel d’Alzon outside of the library, but just mere feet away from the construction of a new nursing building, emblematic of Assumption’s transition to university. It is in these moments, and in this moment today, that I feel this motto put into action, ever ancient, ever new.” 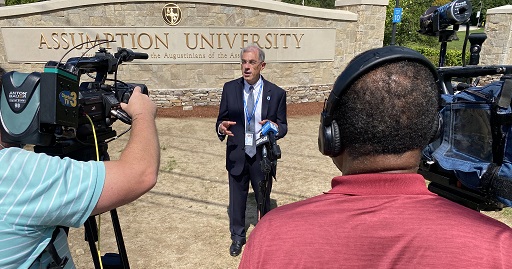 As a small, socially distanced crowd gathered at the front entrance, President Cesareo explained the significance of the moment.

“In 1834, The Venerable Fr. Emmanuel d’Alzon, founder of our sponsors the Augustinians of the Assumption, at the young age of 24 wrote to a friend, ‘For a long time I’ve been thinking about a Catholic university,’  a hope and a dream which would occupy him throughout his life,” he said.  “In a reading from St. Augustine, he speaks about walking as a sign of progress.  Since our founding by the Augustinians of the Assumption in 1904, we have kept on walking  as an institution– established first as an alumnate,  then a preparatory high school, then a college and now a university, bringing  d’Alzon’s dream to its full completion as we transition from Assumption College to Assumption University today.”

President Cesareo shared that a university—originating from the word “universitas” meaning “all”—was founded to promote the education interests of its founding members, thereby creating a community of scholars and students.  “All universities form a community.  However, it is a community that not only looks in upon itself, but also outward, connected to the broader community.”

Referencing Pope St. John Paul II in Ex corde Ecclesiae, President Cesareo noted that a “university has an obligation to preserve and transmit the history and culture of a people and a nation, not discard it, while also critically examining that past so as to learn from it, for the purpose of transforming the self and others. Assumption’s commitment to Catholic liberal education lives out this dimension of a university as a community of scholars and students engaged in a common enterprise of learning.”

As an institution dedicated to Catholic liberal education, Assumption University is a community formed by Catholic ideals, attitudes, and principles.  “The place and meaning of the various disciplines that comprise a Catholic university should not be isolated from one another or compartmentalized, but rather represent a living union in search of truth working toward a higher synthesis of knowledge within ‘the context of the human person and the world that is enlightened by the Gospel, and therefore by faith in Christ,’” said President Cesareo, once again alluding to the teachings of Pope St. John Paul II in Ex corde Ecclesiae.

According to President Cesareo, this distinctive Catholic character and knowing Jesus Christ better through education, was central to the education Fr. d’Alzon sought to provide if he were to ever found a Catholic university.  “Hence the University motto, ‘…until Christ be formed in you’ can only become a reality if we make Christ known to our students through the education this university provides,” he explained.

“As we celebrate today the birth of Assumption University, we re-commit ourselves to being an academic community dedicated to the pursuit of truth, to an education that will give full meaning to human life through the formation of the mind, heart and soul of all who will study here,” President Cesareo added.

Following the unveiling of the Assumption University sign by the executive board of the Student Government Association, 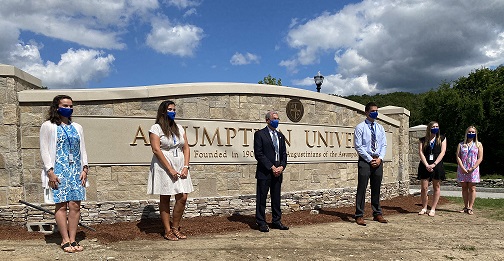 Fr. Gallagher provided a blessing of the new sign. The event concluded with the debut of the Assumption University Alma Mater, performed by the University Chorale, and a series of tributes congratulating the institution on University status from community members near and far, including The Most Rev. Robert McManus HD’12, Bishop of the Diocese of Worcester; Massachusetts Governor Charlie Baker and Lt. Governor Karyn Polito; Congressman Jim McGovern; Senator Elizabeth Warren; Worcester City Manager Ed Augustus; Massachusetts Senate President Emeritus Harriette Chandler; President of Worcester Red Sox Dr. Charles Steinberg; Founder and President of The BASE Robert Lewis Jr., HD’19; Superior General of the Augustinians of the Assumption Fr. Benoit Griere in France; and Fr. Salvatore Musande, A.A. G’08, from the Beni School in the Congo.

The Mass of the Holy Spirit, unveiling ceremony, and videos can be viewed here.